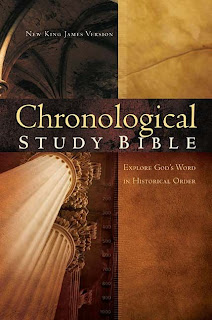 If you've ever tried to read the bible from cover to cover you likely would have noticed that the books aren't exactly in the order that the events took place and that separate books often report on the same events. This can get pretty confusing! The Chronological Study Bible attempts to solve this problem through rearranging the traditional order of the text and providing study notes on the historical context.


The text
It uses the New King James version text which is not one of my preferred versions but i found it readable enough and it is supposedly quite accurate. I found that the chronological arrangement of the text they used made many sections of text i'd previously had trouble understanding make more sense. The rearrangement was particularly useful for the prophetic books such as Isaiah and Jeremiah whose prophesies were interspersed with the stories of the events and people they were describing from previous books. I also appreciated the weaving together of the four gospels into the one story of Jesus' life.


The Notes
The Chronological study bible includes very extensive notes. Unlike most study bibles that focus on the theological aspects of the text, the notes in this bible focus primarily on the historical context of the events documented in the bible. The notes include section introductions, transition pieces explaining the context of the upcoming segment of text, short articles on relevant topics, timelines and maps. As well explaining the biblical context of the texts, many of the notes explained the events in relation to the history of other civilizations. I don't know much about ancient history but still found the notes really interesting.


Layout
Of all the study bibles i've used this one is one of the best in terms of layout. All of pages include some colored elements, mostly in pleasant earthy colors. It also includes many color photos, illustrations and maps. I found the font and font size used sufficiently easy to read.
Posted by Joanna at Wednesday, November 19, 2008