I've recently been at the SPRTE (South pacific regional training event) conference which was held by the Australian Fellowship of Evangelical Students at the Australian National University campus in Canberra, Australia. I think there was about 1100 students in attendance, mostly from Australia, New Zealand, PNG, Fiji and Vanuatu. 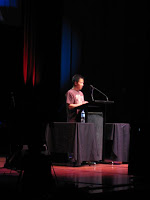 The teaching was really challenging. Phillip Jensen spent several sessions on the problem of sin and our need for the redemption that is available through Jesus alone. These things are so fundamental to the Christianity and our presentation of the gospel and yet it is easy to misunderstand them or underestimate their significance so it was wonderful to hear such truths presented with such clarity and conviction. Nigel Pollock gave some excellent talks dealing with the events of Jesus' death on the cross and how that should motivate us to respond. Richard Chin's talks on treasuring Jesus and What Jesus treasures were greatly challenging & moving and have left me with a lot to think about! 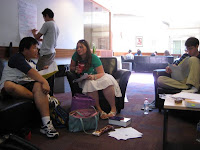 As well as the main sessions, there was strand groups and electives held in small groups to allow for discussion. I completed the 1st strand which was on how to interpret bible texts correctly using a few verses from Romans 3 to practice on. I don't think i've ever spend so long on so few verses before but it was a really helpful thing to do. The people in my group were really nice so it was also a great chance to get to know them. I did the elective on Reaching Out Without Selling Out. The group leader did a great job at dealing with some very tricky topics like post-modernism and there was some very interesting and productive conversation on topics like how Christians should engage with secular media. 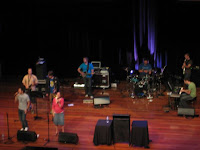 It was really amazing to be able to worship God in song alongside people who although they came from many different countries, churches and walks of life were united in their love for Christ. It was truly a beautiful sound to hear, maybe a bit like what heaven will be like. We were lead very well by a great worship band. I was very impressed by the depth of the songs they chose to use, including a number of great hymns. 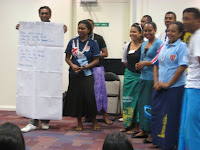 Interacting with people from other countries was a real joy. They taught us songs of praise in their native languages. It was so very moving to hear everyone sing How Great Thou Art in Maori (the native language of New Zealand). Some of the students from Fiji even held a special workshop to teach us songs from their culture. It was also great to be able to spend time with them, talking to people from other places about what God is doing and the struggles they face where they come from. It is amazing how much we really are the same despite our differences. I found hearing about the work of the gospel in some difficult places around the world directly from the people involved very challenging and convicting. It was also great to hear from former International Fellowship of Evangelical Students general secretary Lindsay Brown about God at work amongst students around the world.

It was such a challenging, convicting, encouraging and ultimately lifechanging event. If you are a student, i encourage you to do everything you can to get to the conference next time.
Posted by Joanna at Wednesday, December 10, 2008