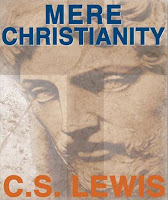 In Mere Christianity, C.S Lewis lays out the case for the beliefs that are central to all branches of Christianity.

It would be worth reading just to put all the quotes you’ve probably heard or will hear in context. It is with good reason that this book has become so popular. Lewis has a great way with words and does well at explaining some big concepts in accessible ways. Lots of times he said things in a way that really made me think, particularly in regards to the relationship between faith and morality. There are some cultural difference between the time Lewis was writing and our time, both in some of the illustrations used and in the arguments for God people find compelling. Despite these differences, the book still has much making it well worth reading for both Christians and those interested in Christianity.

I “read” this book in audiobook format. It was nice to hear someone with a British accent narrating the book given Lewis is British but most narrators seem to be American.