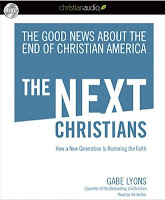 The Next Christians
Gabe Lyons

In The Next Christians, Gabe Lyons critiques the involvement of American Christians in mainstream culture and presents the ways he believes some Christians are getting it right.

There are some good things to be said about the book. I think he is right to critique the prevalent idea of America being a Christian nation. His overview of the different approaches Christians take to engaging in culture was useful, although maybe a little on the simple side.

A few things did bother me though. One of them was the almost entirely very positive portrayal of the “next Christians”. While the people he is talking about are no doubt doing some great things, every movement has its flaws and potential pitfalls which need to be carefully considered. Such excessive positivity also risks making faithful Christians who are not part of this generation look bad in comparison.

Another was that in spots his arguments felt a little unsubstantiated, both in regards to biblical support and real life case studies. It wasn’t that anything he said stuck me as un-biblical, just that it could have used a bit more scriptural support in the text. While the book had some case studies, it would have been good to have more backing up his assertions and generalisations about what this next generation of Christians is like. I was often left wondering who these wonderful people he was talking about actually are!

I think the book has enough value to make it worth reading for some, but it would probably be better to approach it as someones ideas about how the Christian community in America could and should be changing in the future rather than an accurate and ballanced report on how things are.

I “read” this book in audiobook format. Unlike many audiobooks, this one was narrated by the author which I appreciated. He did quite a good job of reading it, although occasionally could have put a little more emotion into it.