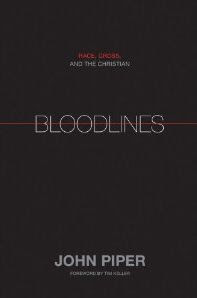 In Bloodlines, John Piper makes a biblical case against racism and for cultural diversity in churches and the broader Christian community.

One of the ways Piper addresses the topic is through reflections on his experience overcoming his own racism. He is commendably honest about his own failings and how he has had to change. I hope this encourages more people to confess and deal with their present and past racism.

The book also includes extensive explanation of what the bible has to say about ethnic difference, racism, and inter-ethnic relations. The main thrust of the biblical study is explaining how the gospel applies to the issues under discussion. He is rightly adamant about the centrality of the gospel to meaningful change in people and to unity in the church. I found his reflections on how the gospel challenges guilt, pride, hopelessness, inferiority, greed, hate, fear and apathy quite thought provoking. I was particularly struck by some of the biblical case studies used as I had not thought of some of them as having implications for racism or discussion of ethnicity. There is also a helpful section looking at a biblical response to related issues like inter-ethnic marriage and where the difference between generalisations about a group of people and racism lies.

There were a few minor things I wish were handled differently in the book. One was putting the best of his material on scientific and sociological understandings of race and ethnicity in an added chapter at the back of the book. This is an important part of the discussion that many people are probably don’t understand that well so it would have been better in the body of the book. Although Piper does make clear his reasons for focusing on black/white relations in America, I still would also have liked to have seen more reflection on applying the ideas to other contexts as other countries often have quite different histories and present realities in regards to racism and inter-ethnic relations.

Overall, I think this is a very helpful book. Piper has done a great job of laying out an understanding of how the gospel impacts upon how we think about race and ethnicity and how we should act towards those who are in some ways different to ourselves.


This book is scheduled for release on September 30, 2011. Review copy courtesy of Netgalley and Crossway
Posted by Joanna at Wednesday, July 13, 2011