13 things I learned on a mission trip

I recently went on a missions trip where we ran a summer holiday outreach program for children and teens in a seaside town. Having never been involved in a mission like this one before, I assumed that working with teenagers wouldn’t be that challenging because there isn’t as much age difference as when working with children and because teens programs don’t involve as much singing and dancing as children's programs. I now know better! I really enjoyed myself but it was also at times a challenging and humbling experience. Here is an assortment of things I learned: 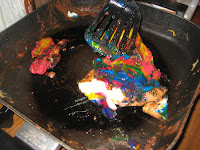 The neon pancakes
Posted by Joanna at Wednesday, January 18, 2012