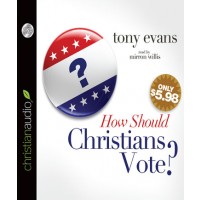 How Should Christians Vote?
Tony Evans
Buy the audiobook/ Buy the printed book

In How Should Christians Vote, Tony Evans teaches on how Christians can apply biblical principles to considering who to vote for.

The big strength of this book is that it emphasises God belongs to no political party and that rather than there being a good party and a bad party that every party will have some policies that are Godly and some that are not. I think this can sometimes get somewhat lost in some of the important discussions about big issues. Also helpful was the exploration of how different backgrounds and perspectives may lead Christians attempting to vote in a Godly manner to weight issues differently and as a result make different voting choices. More assuming the best of other people's political decision making as demonstrated here would go a long way towards lifting the tone of politics related discussion in the Christian community.

However, I think the political neutrality of the book was slipped a little bit in some of the discussions of small government verses more extensive government programs. While there is certainly a case for the government being not the best entity to do some things, the case is not nearly as simple as small government=Godly, big government=evil. Both are a lot more complex than that and can in practice turn out a variety of ways.
Another reservation I had about this book was the heavily American bias. Apart from the very extensive use of American examples, some of what he said seemed to be underpinned by the possibilities American Christians experience in regards to social and political influence. Some of these ideas might not apply nearly so well for believers in countries where the Christian community is too small to wield much political power, Christianity hasn't had a strong influence in shaping the culture or democracy isn't functioning well or at all.

I “read” this book in audio format. Although I normally like the audiobook format, in this case it grated on my nerves. I felt at times the narrator had a somewhat awkward speaking rhythm and slightly condescending tone.