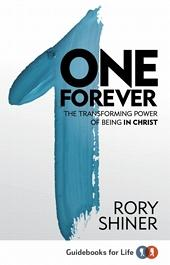 One Forever: The transforming power of being in Christ
Rory Shiner
Buy at Amazon

There isn’t that many talks I would say changed my life but Rory Shiner’s talks on union with Christ at an Australian Fellowship of Evangelical Students conference a few years ago did. It wasn’t a big, blinding moment of epiphany, but the introduction of a set of ideas that began to seep into how I thought about living as a Christian, changing me for the better. So I was rather excited when I heard that Rory was elaborating on these ideas in a book.

The idea of union with Christ or being “in Christ” does at first glance sound a bit obscure. Other than Rory’s talks, I don’t think I’ve heard it preached about much. But, as Rory points out in the book, it’s an idea the New Testament commonly uses to describe what it means to be a Christian. The big idea is that by being united to Christ in his death and resurrection, the victory over sin and death and the new life that he achieved is ours too. If that sounds a bit hard to get your head around, don’t worry because in the book Rory explains it strikingly well.

I think there is a couple of audiences this book can be particularly helpful. One is Christian who have fallen into feeling like Christianity is about what they do. There is quite a few books coming out these days that address such tendencies, but I think this angle is quite a helpful one. The book also has some evangelistic potential. While some of the concepts might require a bit more knowledge that some seekers would have, there are some really fantastic illustrations and metaphors that could be very useful when explaining the gospel.

It is only a short book (less than 90 pages), but there is so much good stuff in it. No matter how much or little theology you think you know, my recommendation is that you read it, followed by reading it again a few more times.