A few weeks ago i competed in a 5.5km race at a marathon. About now those of you who know me offline are probably laughing and with good reason. I'm not usually the runner type and it showed. I got beaten by at least 3200 people and was in serious pain for several days afterward! It was for the most part a fun experience and not one I'm likely to forget in a while!

The experience threw some light on what the bible is talking about when it compares a life of faith to being in a running race.

Do you not know that in a race all the runners run, but only one gets the prize? Run in such a way as to get the prize.
(1 Corinthians 9:24 NIV) 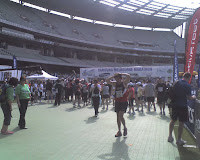 While we were in the same races, there was a big difference between serious professional runners and the rest of us and it showed in the race results. Many of the serious runners had been training for months and eating right. Come the day of the race running fast wasn't a problem because every day they'd focused their efforts on running in a way that would win them the prize. For me on the other hand, having let the training slip by the wayside and having eaten too much campus food in the previous weeks (aka junk), moving fast was a definite problem. I made it to the finish line, but many did not. The same kind of situation exists when it comes to living a life of faith. Your ability to keep going and keep growing stronger in your faith even when it is hard depends on what you are doing everyday. Like an athlete training for the race we need to train ourselves spiritually, through prayer, bible study, holy living and other spiritual disciplines. Doing these things will help you run to win in the race of faith. Just like a runner staying in bed on a rainy day it is easy to become lazy and complacent. Keep this up and at best you might manage to stick it out for the duration but not run the race of faith very well. At worst you won't make it, too many Christians simply don't have the strength to keep going through the tough bits of the race and give up their faith.

Therefore, since we are surrounded by such a great cloud of witnesses, let us throw off everything that hinders and the sin that so easily entangles, and let us run with perseverance the race marked out for us. (Hebrews 12:1 NIV) 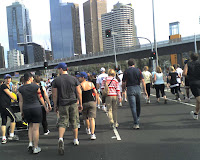 Some runners would try and run with bags or carrying stuff that they didn't need. It wasn't necessarily bad stuff to have but it slowed them down or made the race uncomfortable. I only had a very small bag and it was still annoying at times. In life we can carry stuff with us we don't need too. Obviously we need to get rid of sin, that's a no brainer! When this is talked about in Hebrews it talks about stuff that hinders as well. Things that are hindrances to living a life of faith often aren't sins themselves but can still stop us from reaching our potential. It could be a relationship, a habit, an activity or a way of thinking that isn't helping. Sometimes it can be hard to see when something in our lives really isn't helpful anymore because we get so used to how we've always done some things or maybe whatever is a problem now was once actually helpful. Just like before they run runners make sure that nothing they are wearing or carrying will get in the way of them doing their best, sometimes in life we need to stop to evaluate if anything is holding us back and deal with it.

Email ThisBlogThis!Share to TwitterShare to FacebookShare to Pinterest
Labels: musings