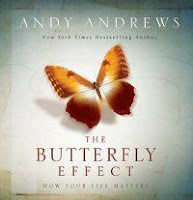 In The Butterfly Effect, Andy Andrews attempts to communicate how much everything we do has the potential to change the world.

The book follows how the little actions of someone impacted someone who impacted someone else and so on eventually resulting in something that has made a big difference to the world happening. They are certainly interesting stories. Another positive about the book is the beautiful artwork and photography. They did a really good job with the book’s graphic design.

I did think the book had a few weaknesses. One was that I thought it tended to overstate its point. It claims billions of people will be impacted by what we do. We certainly can change the world, but realistically not everything we do will change the world. It gives too much credit to the individual for shaping the world and too little to God.

The other thing that bothered me was the portrayal of America it presented. One of the stories it told was about an American victory in war. It argued that because America won that war it was able to do a whole lot of wonderful things in the world. Maybe there is some truth to that but it seems to excessively glorify America and hardly seems a balanced perspective on America’s involvement in the rest of the world.