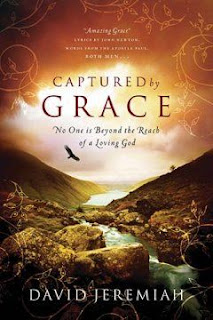 In Captured by Grace, Dr. David Jeremiah explores the wonder of God’s grace.

I really enjoyed this book. It deals with the big idea of grace in an easy to read way. Much of the book is vivid narratives about the lives of the Apostle Paul and John Newton (the man who wrote the hymn Amazing Grace). I could easily picture the scenes he described. In addition to the storytelling is some great reflections on the nature of grace. The reflections are divided up into the sections of grace for the past, grace for the present and grace for the future.

I think this is a book that will be helpful in some way to all Christians, whether they be new Christians coming to understand grace for the first time or not so new Christians rediscovering the wonder of the grace they already know. I think that this book would also be understandable and helpful enough for someone investigating Christianity, particularly if they’ve had thought Christianity was about rules and us earning our way to God.