Discipleship in the here and now 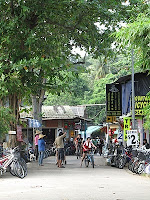 The idea of traveling holds an elevated place in the popular imagination. It has become more than a way to get somewhere else and more than a way even just to see new things. Going somewhere exotic (or at least different) has become the way we “find ourselves”. It isn’t accidental that books like “Eat Pray Love” strike such a chord. If secular culture had a sacrament, travel might be it.

I think the almost sacramental esteem travel is held in is particularly pronounced among young people here in Australia. It is probably that we are kind of isolated in our own little corner of the world so going elsewhere seems like more of a big deal. When I lived in Singapore it blew my mind that it was possible to go to another country (Malaysia) on a $2 bus ticket and that some people went there to grocery shop.

When compared to the possibilities of being somewhere else, normality can seem a little bland. Fitting quiet time in around your commute is not at all the stuff of epic narrative. Stories of finding oneself among the goat herders of Tibet will tend to sell better than memoirs of learning faith amid the everyday stuff of car maintenance, bad weather and too much email spam. People will generally find what someone learned unicycling across the country more interesting than what you learned during your daily commute. But this ordinariness tends to be where discipleship happens.

Yes, God sometimes calls people to go elsewhere and sometimes travel has a genuinely positive impact. But, for many of us the more spiritual thing to be doing is focusing on growing where we are rather than hankering to be someplace else It may not be exciting but the change that happens in everyday life is often more lasting. It tends to be more durable because it is made up of lots of tiny stretches towards Godliness and doing the right thing rather than culture shock induced epiphany while somewhere strange. Learning to be patient in the grocery store doesn’t seem very earth shaking but it all adds up. Everyday kinda growing is also important because discipleship happens in the context of meaningful relationships. As cool as bravely setting of to a foreign land where you barely speak the language may seem, if we never have the input of other people were are likely to end up spiritually and emotionally unbalanced. And, where better to learn than in the places, relationships and activities you are going to put your developing maturity into practice? It doesn’t matter how things were somewhere else if however we developed doesn’t translate into everyday life.

There is still places I’d like to go or to revisit. But I’m learning in the meantime that my best chance to flourish and grow doesn’t necessarily need a plane ticket or annual leave. Maybe following Jesus for me means staying here, both in the sense of geographical location and of focus. Maybe my best shot at growing in Godliness is buried beneath the million little tasks of right here and right now.