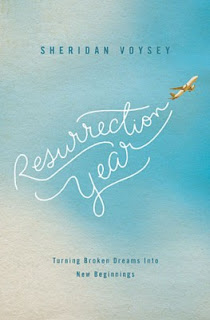 Normally it takes me quite a while to get through a book. I read reasonably fast but usually have a lot of books on the go that I’m dipping in and out of. Resurrection Year by Sheridan Voysey was different- although it is not a particularly short book, I finished it in an afternoon. Part of that was due to curiosity- I was a big fan of the radio show Sheridan used to host and had been rather sad when he left to move overseas so I was interested to know where life had taken him since. Part of why I finished it so quickly is that he writes so beautifully and compellingly. The pictures he paints of important moments in his journey are so very vivid.

But, more importantly, the book drew me in and kept me reading with its honesty and insightfulness about the realities of living as a Christian in a broken world where bad things happen and sometimes good things stay out of reach. Sheridan tells with unflinching honesty the story of he and his wife’s struggle with infertility and learning to rebuild their lives as it became increasingly clear that they would not be able to have a child. In the Christian subculture we tend to emphasise stories that follow the standard testimony formula of things were terrible, then God intervened dramatically and then we got what we needed/wanted and things were awesome. Sometimes things work out like that and we should be thankful, but what about when they don’t? It is so common for things to just not resolve for even the most faithful people. We don’t tend to talk about those stories because they aren’t easy to tell but they really need telling. My broken dreams and disappointments have been different but it was so helpful and comforting to hear their story.

Another important thing that drew me in as I read the book was the idea of deliberately seeking new starts in the wake of broken dreams. For Sheridan, that meant moving to Europe so his wife could pursue some of her dreams, even though that would have a negative career impact.. While the idea of doing something dramatic after hard experiences is not that uncommon, what makes Sheridan’s story one to learn from was that it wasn’t about self indulgence but a very deliberate effort to work through spiritual issues, to seek the good of his wife and to find meaningful new direction. Unfortunately for myself (and I’m guessing most people) an overseas move is not a viable way to seek healing and new starts, it has still given me a lot to think about.

Resurrection Year can’t have been an easy book for Sheridan to write but I’m glad he did. It is a beautiful, brave book that helped me and I think will help many others. I really encourage you to get it.