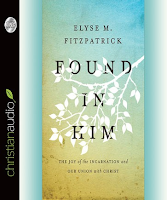 Found In Him: The Joy of the Incarnation and Our Union with Christ
Elyse Fitzpatrick
Buy the audiobook / buy the print edition

Union with Christ is a theological idea that has tended to not get a great deal of attention in the past. That’s unfortunate because its an idea that appears quite often in the New Testament and one that has big implications for how we relate to God. Thankfully that neglect is starting to be rectified. In addition to a number of academic level works, Rory Shiner published a brilliant book about it earlier this year, Desiring God has announced a conference on the topic and Elyse Fitzpatrick has recently released an good book on the topic called “Found In Him: The Joy of the Incarnation and Our Union with Christ”

Found In Him takes the really helpful approach of looking at union with Christ together with an in-depth look at the incarnation and humanity of Christ. This section on its own is helpful because it unpacks a lot of why it matters that Jesus lived as fully human for so long rather than just dashing down out of heaven briefly to save us. In the context of this book it was especially helpful because it also served to set a good foundation for the discussions in the second half of the book on union with Christ. The second section provided a reasonably clear explanation of the union with Christ, although I felt bordered on overusing the metaphor of marriage. The book made a strong close with an explanation of how our effort and being good relates to the ideas in the book.

The book was well structured and clear enough to follow. However, I found the writing style didn’t quite work for me. The writing was often a bit more over descriptive and slow to get to the point than I would have preferred. Don’t let that put you off reading it though- you may find the style works well for you.

Overall verdict: Recommended. It would do all Christians a lot of good to ponder the truths laid out in this book.